A Few Steps to Relief! 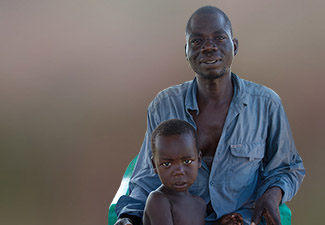 Elisa was a farmer in South Sudan. Life was looking good for him. After many years of war and conflict, peace had finally come and his country. In 2011 it had officially been recognized as sovereign nation and people had high hopes that they would now be able to build a strong and peaceful country. Elisa had acquired some land and was finding success as a farmer. In 2014 he got married and he and his new wife had a baby boy.

That is when his fortunes started to turn. In 2015 Elisa had an accident on the farm that left one of his legs paralyzed from the waist down. Not long after that, civil war broke out in the newly formed country. As the violence passed through his county, Elisa witnessed the death of many of his neighbors and he began to fear for his own life and the lives of his new family. Together they made the decision to make a run for the border that South Sudan has with Uganda. A friend of his, who was also going to Uganda, pushed him the whole way on a bicycle while his wife walked behind carrying the baby. It took them three days to reach the border. Once they were across and processed by border officials, a United Nations vehicle took them to the Bidi Bidi Refugee settlement where they were assigned a piece of land to start new lives as refugees.

As they settled in, they faced many challenges. Because of his handicap it was difficult for him to build a shelter and establish their new home. One of the biggest difficulties that Elisa faced was finding a place to relieve himself. As more refugees arrived, more and more trees and bushes disappeared as people scrounged for firewood and sticks to build their shelters. It was getting harder and harder for Elisa to travel the distance needed for privacy.

That is when ADRA came to his assistance. Members of an ADRA volunteer community group were making their way through Bidi Bidi teaching people about hygiene and energy efficient stoves to help prevent deforestation around the camp. They also had the mandate to help the most vulnerable people in the camp get established. Seeing his situation, the team got together and built a latrine for Elisa. They also provided him with a lamp that is charged each day by a solar panel. 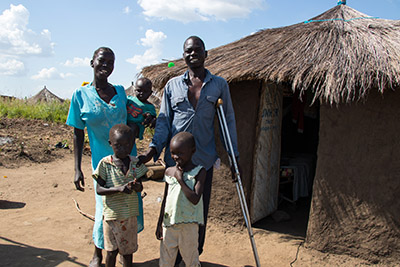 Elisa says, “I am so thankful for what ADRA has done for me and my family. When I first saw the people in the bright reflective ADRA vests visiting and helping people in the settlement, I thought, I would like to become involved in whatever they are doing, but I doubt they would include me because of my disability. I was so surprised and pleased that they came and built me a toilet. Now, when I have to go, I only need to walk a few steps from my home! I am so excited about the light that they gave me. We use it in our home every evening. I also use it when I need to go to the toilet at night. It helps me not to step on a scorpion or snake! I am so grateful that ADRA has included me. Please keep up the wonderful work that you are doing!” 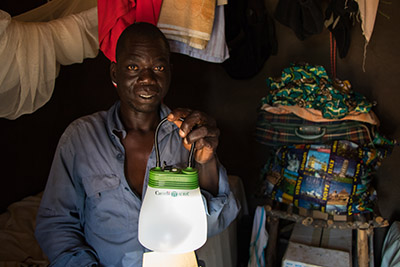 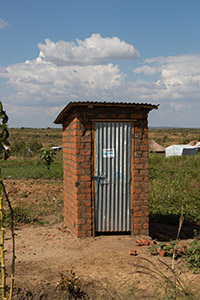