Changing Lives in the Barangay

Changing Lives in the Barangay 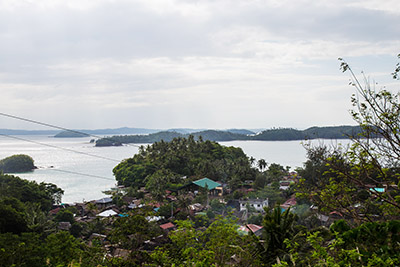 A “barangay” is the smallest administrative division in the Philippines and is the native Filipino word for village, district or ward. ADRA’s EMBRACE program is working in some of the most remote barangays in the country. Canadian volunteer, Jordan Venton-Rublee, is spending a year in the Philippines, observing and documenting the EMBRACE program and how it is changing and saving lives. She recently went with the ADRA team of Maternal, Newborn and Child Health (MNCH) workers to visit the barangay of Sumaoy, one of the most remote Island districts in the provence of Camarines Sur.

This is her report.

In early November the EMBRACE MNCH team travelled overland and sea to facilitate the last of the gender sensitive training for the barangays selected this year. Situated on the entrance to the Pacific Ocean, the far-flung island barangay of Sumaoy has the highest rates of underweight children out of all the barangays receiving assistance from ADRA this year – and is filled with keen citizens looking to learn more about combating this dire problem within their communities. 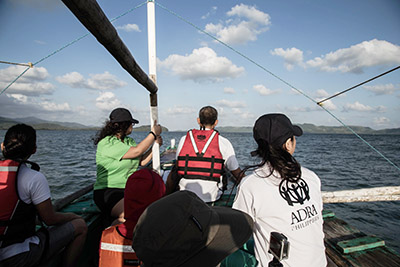 From the EMBRACE office, Sumaoy is a two hour trip over bumpy mountainous roads to Garchitorena, and then another two hours by small boat across rocky seas to finally reach the island community.

Meeting in the evacuation center for the island forty health leaders and community heads came together to learn ways to address the stereotypes within their own village. The training facilitated by the MNCH team centered on leadership, teambuilding and listening skills, as well as education around gender sensitivity. The aim was to break down harmful misconceptions, and find ways to nurture a more understanding environment within the village and homes. This is a key part of the early work being done on the ground in the province of Camarines Sur.

At only thirty-eight Ivy is both a mother and a grandmother in her community – as well as being a parent leader in the community since 2009. She reflected on the training, sharing that she had learned a lot over the day – including skills that she intends to bring back to her family and young grandchild.

“I’m really happy to learn and be a part of this group, especially now that I have a child with a young child herself. I think I can apply the knowledge learned today in both my parent groups and as a leader in my family as a mother and grandmother.”

There are multiple barriers to how care is accessed among women who are pregnant in the region. One of the first steps to addressing this is breaking down the way that gender is perceived within project communities. 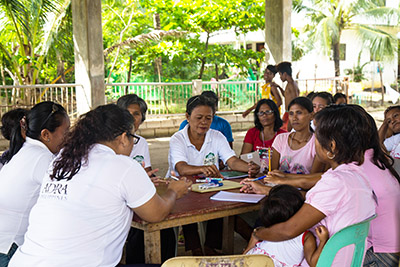 Nhes – a Barangay Nutrition Scholar in Sumaoy – is on the front line of the fight against malnutrition on the island. In her job day to day she is involved with weighing children, deworming, providing vitamins and monitoring of the overall health and nutrition among the youngest in the village.

She explained that she feels better prepared now, and more self-confident in her ability to carry out her work. Nhes even remarked that she may have held biases that she has never even thought about when it comes to gender. “It’s important for a facilitator to be gender sensitive, to be aware of the feelings of those of the other gender.”

One of the several men in attendance, Benal San Gabriel is a barangay captain and noted that he was keen to bring the skills he learned back to his family. “I can see this training being helpful because it will empower me as a public servant in the community, and I can share it with my family and neighbours.”

As one of the MNCH Officers facilitating the training on Wednesday, Glaiza Fabelllon reflected on the fact that this training had been needed within the community. “It’s quite new to them, especially the gender sensitive part, as I observed they are not really aware of the small ways we can disregard other genders.”

One of the primary goals of the EMBRACE program is to improve the health of mothers and children by improving nutrition. 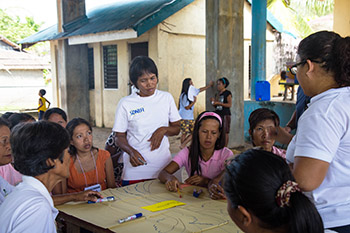 Francia, Sonia, and Isabella are all community health workers within the municipality, as well as our project participants of EMBRACE, and are all charged with observing families within the barangay. As I spoke with them, they shared with me how EMBRACE is helping them and their friends.

Sonia brought up the fact that the skills taught during the orientation are not only important to her as a public servant, but also for her own family, as she also has a child at home suffering from malnourishment.

“We are trying to think o