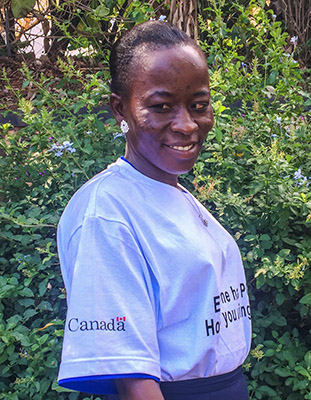 Grace remembers that life was good in her home in South Sudan.  But during the war, many of her friends were killed. After the soldiers came through her village, dead bodies were everywhere.  “I had to step over them,” she said.

Grace decided to flee to Ugandan refugee camp with a group from her village. On the way, 15 people in her group were killed. Fortunately for Grace, neither she nor family were injured.

She stayed in transit camp for two weeks. Conditions were harsh. In May, she was assigned to the Mvepi refugee camp. Things were very difficult when she first arrived. There were no latrines.

When ADRA came and started working in the camp things really improved. ADRA workers taught hygiene and helped them build latrines. “The workers from ADRA have treated us very well, much better than we were treated by others,” she said.   ADRA cares for everyone, even giving special attention and assistance to people with Special Needs.  ADRA’s program for the refugees here is very comprehensive. But more people are arriving every day.  Thousands are still in need.