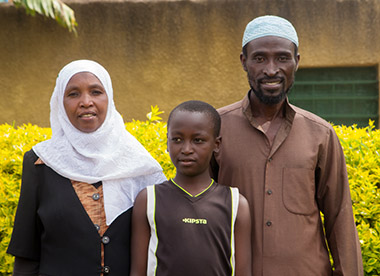 Mariam lives in Rwanda with her husband and five children. For a number of years, Mariam and her neighbours have been struggling with harsh weather.  Global climate change has wreaked havoc in many parts of Africa and Rwanda has been hard hit. It has become increasingly difficult to know when to plant. The dry season is lasting longer and is sometimes followed by severe flooding.

To subsistence farmers, seeds are extremely valuable. It is devastating to see your precious plants barely sprout in the parched earth and then be washed away by heavy rains.  The winds of drought and the wash of floods also cause soil erosion. Topsoil, along with the fertilizer that the farmers have added to their fields, can quickly be lost.

In 2013 the co-operative group in Mariam’s village was selected by ADRA to participate in agricultural and nutritional training. Specialists would visit the group and provide instruction on new methods of agriculture designed to cope with the changing weather. The program promised that they were going to learn how to grow more food to feed their family, even in the dry season.

At first, Mariam was skeptical of some of the techniques that the ADRA agronomist shared. She wondered if it would be worth investing in the plastic sheeting needed for some of the growing beds. She also questioned the value of some of the new vegetables that ADRA was recommending they grow. She had never grown vegetables before and was not aware of the nutritional benefits of including them in her family’s diet. She had never even tasted some of the vegetables that ADRA was recommending she plant. (A typical diet in Rwanda consists primarily of plantains, pulses, sweet potatoes and cassava. Ugali, a kind of cornmeal porridge, is a favourite and often consumed at every meal. While very filling, the diet is very heavy on starches and lacks some of the nutrients important for healthy immune systems.)  The new foods that ADRA was introducing at the workshop would bring more nutritional balance. 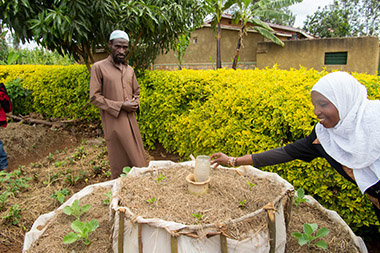 As the training program finished up, Mariam decided to give everything a try. ADRA provided high-quality seeds and she was soon growing a host of new foods that included onions, green peppers, spinach, cabbage, beetroot, carrots and tomatoes. The methods that the ADRA program taught them actually worked!  The wicking beds required minimal watering and they were able to grow food right through the dry season, something she had never dreamed possible before!

Following the recommendation of the workshop, Mariam also planted some fruit such as papaya, mango and orange trees. This was what ADRA called, “intensive gardening”, making the best possible use of small plots of land. The people of Mariam’s village were used to planting one crop over a wide area.  ADRA’s method of growing a variety of crops and trees together in one plot also helped to prevent some of the pest problems they have had in the past.  As they rotated the types of vegetables planted each year to different locations in their garden it helped keep the soil nitrogen rich.  Methods of composting and organic fertilizer produced amazing harvests. 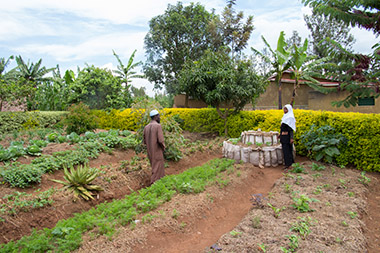 Rather than use chemical pesticides, Mariam used a natural method taught by ADRA.  She ground up the leaves of the common neem tree into a powder, and soaked it overnight. From this, she would make a solution that she could spray on her crops. This not only kept pests away from her garden, but it also helped reduce the number of mosquitos around her home.

Another important element of the program was the methods of rainwater harvesting. Capturing the rain that fell unto the roofs of their homes and buildings, the water is stored for use during the dry season.

The program has changed their lives!  Mariam said, “the program taught us not only how to grow better gardens but also the importance of having a good variety of fruits and vegetables. We are much healthier now. We never go hungry and even have extra food to sell to others during the dry season!  I now think bigger. The ADRA program has helped train my mind to think of new and different ways that I can make income for my family.”

Mariam and her husband have already made over 500,000 Rwandan francs with the vegetables that they have been able to sell.  They have used some of the income to start another business of growing mushrooms from which they are also making a good income.

“Everything you see in the yard is because of ADRA”, Mariam beamed her thanks with a big smile.