The ongoing civil war in Syria has forced over 11 million people from their homes. An estimated 300,000 people have been killed and approximately 5 million have fled the country to find refuge in Jordan, Turkey, and Lebanon. The hardest hit city in recent months has been Aleppo. Once the largest city in Syria, Aleppo was the heart of the country’s financial and industrial operations. Today the beautiful city lies in ruins, a target of massive air bombing campaign conducted by Russia which has aligned itself with the Syrian government as it attempts to regain control over rebel held territory. Bombs have hit all areas of the city, including hospitals and civilian neighborhoods. Under siege, residents are finding it hard to find water and food.

Those fortunate enough to escape are finding new challenges in the communities they find to take refuge. In Damascus some families are getting help from ADRA. 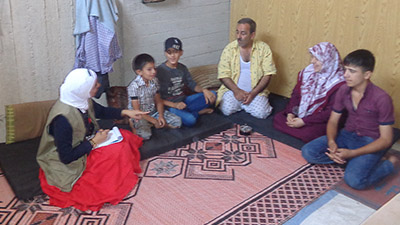 Abu Mohammed (Father of Mohammed) is a new arrival from Aleppo. He fled with his family due to the deteriorating situation there. However, there was no school near his new home in Katana, a rural area close to Damascus. He was obliged to register his two children; Mohammed aged 10 years and Fatima, aged 8 years, in a school some distance away. Due to his experiences in Aleppo, he feared for the safety of his children during the long walk to and from the school every day. In addition, the school where Mohammed and Fatima were planning to attend is overcrowded with other children displaced by the war. The addition of Mohammad and Fatima would only add to the overcrowded situation and difficult learning environment.

When Abu Mohammed learned that ADRA is in the process of rehabilitating a school close to his home which was previously a collective shelter, he was face lit up. He was so excited that Mohammad and Fatima would be able to attend a school close to their home. This would make their walk to school much shorter and safer, especially during the long winter days when the temperature can get below freezing in Katana.

ADRA is planning the rehabilitation of 15 schools in the area to help ease the education crisis that is happening for Syrian children today because of the war. This project will provide traumatized children with quality education in a welcoming, safe environment.