I Danced with the Angel Mary!

I Danced with the angel Mary!  Or at least, I held her in the dance.

The villagers were gathered at an EMBRACE project site for training in looking after their babies. Most were women, but there were a couple of men there too. When it was announced that a representative from the donor agency was present (that being me) they spontaneously stepped outside their shelter and began to dance and sing. I asked a colleague what they were singing and he told me, “Thank you ADRA Canada for helping us!”

I took a couple of pictures and enjoyed the moment, wishing that our supporters in Canada could see and hear what I was experiencing—this sharing of delight. As a result of the EMBRACE project, mothers no longer feared childbirth as much, since a smart new ambulance was available to take them to the health centre when they gave birth. They understood better how to care for their health. And as a result of the training received in permaculture, they were now growing wonderful kitchen gardens and their families were eating lots of nutritious vegetables and fruits. 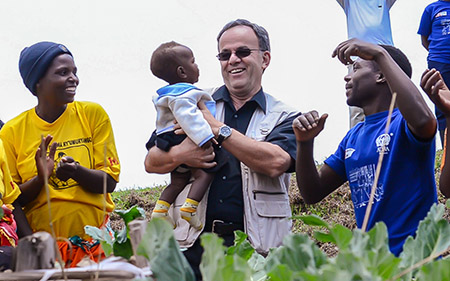 Finally, I decided I couldn’t just watch, and so I moved into the group and danced (or at least swayed up and down!) in unity with the happy villagers. The young mother next to me let me hold her baby girl, who solemnly regarded me while everyone clapped and laughed. Later I asked the baby’s name. I was told what sounded like a sentence or two in Kinyarwanda (the local language) but which ended in a couple of French words: “Ange Marie”. So I shortened everything to “Angel Mary”.

Because of the support you give to EMBRACE, Angel Mary has a good chance of a healthy life, with many opportunities. Thank you!