Vladimir is 75 and has been a resident of Schastye in eastern Ukraine since 1956. Before his retirement he worked as an engineer for the thermal power plant in Schastye, where he gained a good reputation and respect for his hard work.

Vladimir is married, but sadly, does not live with his wife.  She was paralyzed by a stroke and lives in Russia with their daughter as she can provide the care that Vladimir cannot.

When the conflict in the Ukraine started, Vladimir’s house was partially damaged by the shelling.  His leg was also damaged in the blast.  He was not able to get to the hospital for proper treatment of his wounds and he developed an infection that led to gangrene.  His leg had to be amputated. With his wife in Russia, and his daughter not able to travel into the Ukraine due to conflict, Vladimir was left to face this life-crisis alone.  As he lay in his hospital bed recovering from his surgery, he became very lonely and depressed.  As each day passed, his depression deepened as he as he had no money to pay for the cost of the operation or the hospital stay.  How could he return to his damaged home and manage alone with just one leg?  His pension barely covered his needs before the conflict.  How would he be able to cover all of the extra expenses involved with becoming disabled? 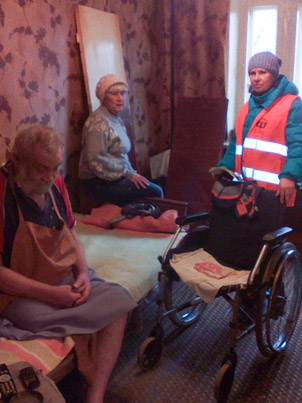 Fortunately for Vladimir, his case was referred to ADRA’s ACAP project that is helping those affected by the conflict in the Ukraine.  ADRA’s community workers visited Vladimir at the hospital and put him on the list for an unconditional cash grant for to repair his home and assist with his other needs. They visited his home to assess the damage with the local administrator.

One day as he was lying in his hospital bed, he received a bank SMS notification that UAH 10,000 ($517 CAD) had been credited to his account.  He could not believe his eyes and was overcome with joy.  As the ADRA cash grant is unconditional, he was able to use part of the funds to purchase a wheel chair as well as to pay his hospital bill.  With the balance of his grant Vladimir was able to carry out some repairs on his house.  Vladimir now faces life with a new hope.  He is very grateful to ADRA for the support.